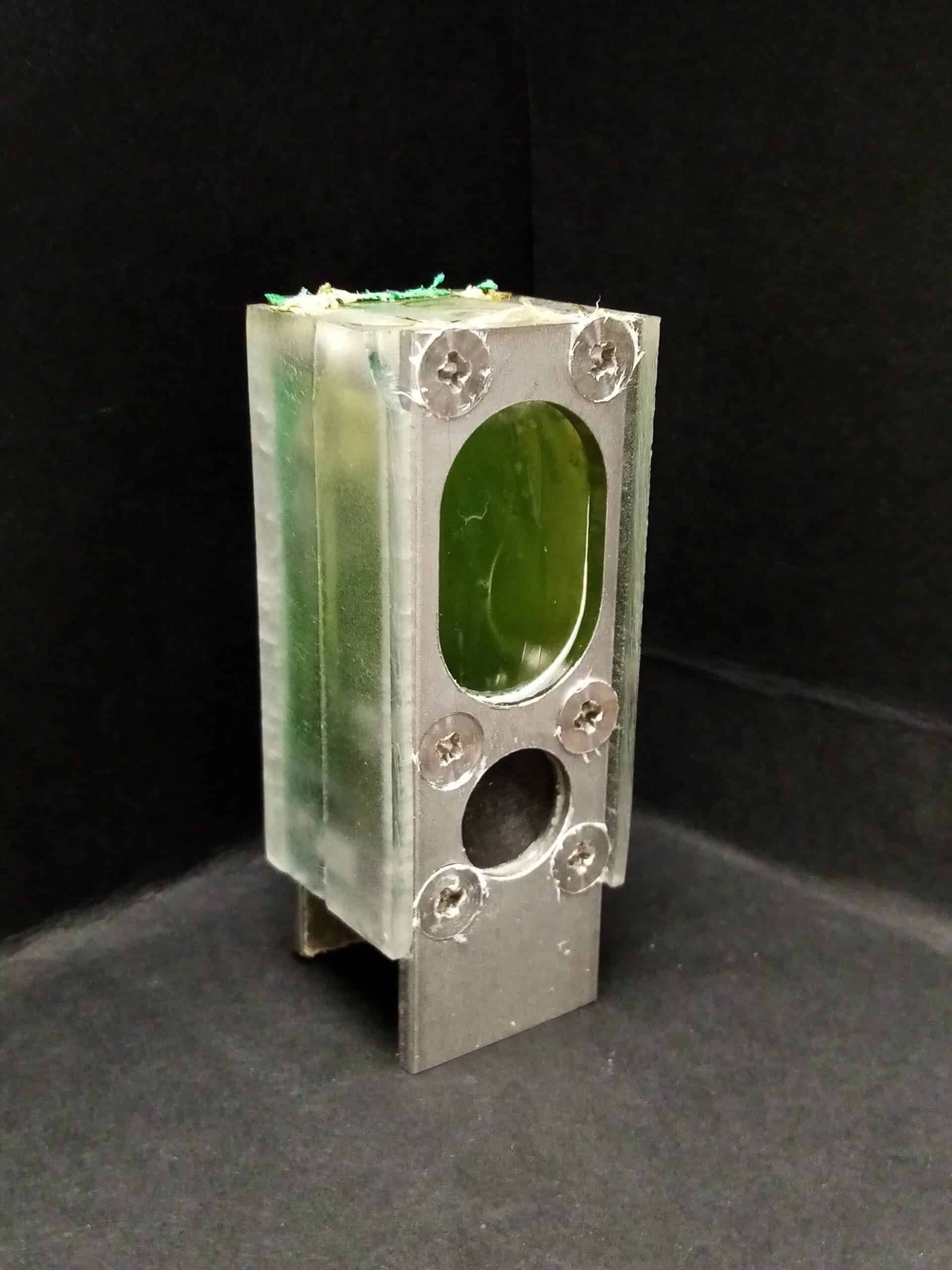 Green computing takes on a whole new meaning: researchers at the University of Cambridge have been developing an algae-filled power cell that has been successfully powering a microprocessor for a year now – and counting.

Synechocyst is a widespread species of photosynthesizing blue-green algae. By capturing the energy of the sun, these algae generate a very weak electric current. The cell, after being filled to the brim with Synechocystuses an aluminum electrode to tap into these biologically generated currents and power a microprocessor – the part of a computer that does the calculation.

The system is meant to prove that it is possible to run small electronic devices cleanly and sustainably using only water, ambient light and common, inexpensive materials. It’s also almost entirely recyclable, to boot!

“The growth of the Internet of Things requires an increasing amount of energy, and we believe this will need to come from systems that can generate energy, rather than just store it like batteries,” said Professor Christopher Howe from the University of Cambridge’s Department of Biochemistry. main co-author of the article.

“Our photosynthetic apparatus does not discharge like a battery, because it continually uses light as its energy source.”

The algae cell is comparable in size to an AA battery and designed to be easily replicated and mass-produced. Its inventors envision hundreds of thousands of such batteries powering Internet of Things devices worldwide. Boasting an incredibly high degree of autonomy for a power generation system, the team believe it would be most useful in off-grid or remote locations, where even small amounts of power can make a huge difference. .

The Internet of Things (IoT) is the vast network of electronic devices that collects and shares data in real time through the Internet. It is estimated that there are billions of devices that are part of the IoT, and they range from the mundane, such as smartwatches, to niche and specialized equipment such as sensors in power plants. And it is estimated that the number of such devices will increase rapidly in the future. The Algae Cell aims to provide designers with a power source capable of powering such devices anywhere and reliably.

In a proof-of-concept experiment, the team used the algae cell to power an Arm Cortex M0+ microprocessor, which is often used to provide computing power for Internet of Things devices. It has been tested in home and semi-outdoor conditions under natural light and natural temperature fluctuations. It was kept in continuous use for six months.

The team reports that they were “impressed” with the consistency of the energy flow provided by the cell over time. The durable nature of the cell was also a nice surprise, as the team initially assumed it would only work for a few weeks.

The cell does not need any nourishment, because the algae produce their own food through photosynthesis. It can even continue to generate electricity during periods of darkness. The researchers believe this is because the algae process certain nutrients even in the dark, ensuring a constant supply of electrical current during this time.

Such a power cell paves the way for an alternative method of powering IoT devices – the traditional approach of using lithium-ion batteries would be impractical, according to the team. Such an approach would require three times more lithium than is produced globally annually, they explain. Traditional solar cells, which would be a viable alternative, require hazardous materials, can have adverse effects on the environment, and only produce power when exposed to direct sunlight.

The article “P. Bombelli et al, Powering a microprocessor by photosynthese” was published in the review Energy and Environmental Sciences.

5 tips for launching a startup quickly