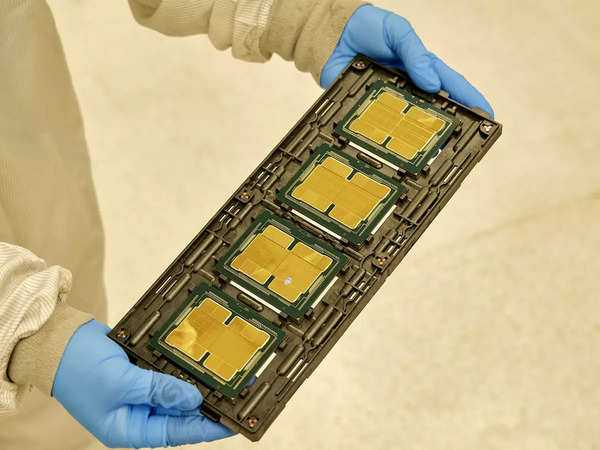 The enormous task of creating a small microprocessor

Some of them have over 50 billion tiny transistors, each 10,000 times smaller than a human hair. They are created on massive, ultra-clean factory floors that can be seven stories high and four football pitches long. Microchips are the cornerstone of the modern economy in many ways. They are used to power computers, cell phones, automobiles, appliances, and a variety of other electronic devices. However, since the pandemic, their global demand has increased, leading to supply chain disruptions and global shortages. This, in turn, is fueling inflation and raising fears that the United States is becoming too dependent on foreign-made chips.

Microchips, or integrated circuits, began to replace bulky individual transistors in the late 1950s. Many of these tiny components are produced on a piece of silicon and wired to work together. The resulting chips store data, amplify radio signals and perform other operations; Intel is famous for a variety called microprocessors, which perform most of a computer’s computational functions. Intel has succeeded in reducing the transistors of its microprocessors to mind-blowing sizes. But rival Taiwan Semiconductor Manufacturing Co. can make even smaller components, a key reason Apple chose it to make the chips for its latest iPhones.

The United States accounts for only about 12% of the world’s semiconductor manufacturing capacity; more than 90% of the most advanced chips come from Taiwan. Intel, a Silicon Valley titan seeking to restore its long-standing lead in chipmaking technology, is betting $20 billion that it can help alleviate the chip shortage. It is building two factories at its chip manufacturing complex in Chandler, Arizona, which will take three years, and recently announced plans for potentially larger expansion, with new sites in New Albany, Ohio, and Magdeburg, Germany. Why does making millions of these tiny components mean building – and spending – so big? A look inside Intel’s manufacturing facilities in Chandler and Hillsboro, Oregon, provides some answers.

Such successes at a company based in Taiwan, an island China claims as its own, add to signs of a growing technology divide that could put advances in computing, consumer devices and military hardware endangered by both China’s ambitions and natural threats to Taiwan such as earthquakes and drought. And he shed light on Intel’s efforts to regain the technological lead. Chipmakers are packing more and more transistors on every piece of silicon, which is why technology is making more every year. It’s also why new chip factories cost billions and fewer companies can afford to build them. In addition to paying for buildings and machinery, companies have to spend a lot to develop the complex processing steps used to manufacture chips from wafer-sized silicon wafers – which is why factories are called “fabs”.

This step has become a new battleground, as it is more difficult to manufacture even smaller transistors. Companies now stack multiple chips or place them side by side in a package, connecting them to act as a single piece of silicon. Where packaging a handful of chips together is now routine, Intel has developed an advanced product that uses new technology to bundle 47 remarkable individual chips, including some made by TSMC and other companies as well as those produced in the Intel fabs. Intel chips typically sell for hundreds to thousands of dollars each. Intel launched its fastest desktop microprocessor in March, for example, at a starting price of $739. A piece of dust invisible to the human eye can ruin one. Fabs therefore need to be cleaner than a hospital operating room and require complex systems to filter the air and regulate temperature and humidity.

Huge machines project chip designs onto each wafer, then deposit and etch layers of material to create their transistors and connect them. Up to 25 wafers at a time move between these systems in special modules on automated overhead rails. Processing a blister requires thousands of steps and up to two months. TSMC has set the tone for production in recent years, operating “gigafabs”, sites with four or more production lines. Dan Hutcheson, vice president of market research firm TechInsights, estimated that each site can process more than 100,000 wafers per month. He estimated the capacity of Intel’s two planned $10 billion facilities in Arizona at about 40,000 wafers per month each. After processing, the wafer is cut into individual chips. These are tested and packaged in plastic wrappers to connect them to circuit boards or parts of a system.

Fabs must also be immune to almost all vibrations, which can cause expensive equipment to malfunction. Such fabulous clean rooms are built on huge concrete slabs on special shock absorbers. The ability to move large quantities of liquids and gases is also essential. The upper level of Intel’s factories, which is about 70 feet high, has giant fans to help circulate air in the clean room just below. Beneath the clean room are thousands of pumps, transformers, electrical cabinets, utility pipes and chillers that connect to production machinery. Fabs are water-intensive operations. This is because water is needed to clean the wafers at many stages of the production process. Intel’s two sites in Chandler collectively draw approximately 11 million gallons of water per day from the local utility. Intel’s future expansion will require much more, an apparent challenge for a drought-stricken state like Arizona, which has cut water allocations to farmers. But agriculture actually uses a lot more water than a woodchip factory.

Intel says its Chandler sites, which depend on supplies from three rivers and a system of wells, recover about 82% of the fresh water they use through filtration systems, settling ponds and other equipment. This water is returned to the city, which operates Intel-funded treatment facilities and redistributes it for irrigation and other non-potable uses. Intel hopes to help boost water supplies in Arizona and other states by 2030, working with environmental groups and others on projects that save and restore water for local communities. To build its future factories, Intel will need around 5,000 skilled construction workers over three years. They have a lot to do. Excavating the foundations is expected to remove 890,000 cubic meters of earth, hauled in at the rate of one dump truck per minute, said Dan Doron, Intel’s chief construction officer.

The company plans to pour more than 445,000 cubic meters of concrete and use 100,000 tons of reinforcing steel for the foundations – more than for the construction of the world’s tallest building, the Burj Khalifa in Dubai, UAE United Arabs. Some construction cranes are so large that more than 100 trucks are needed to bring the parts in and assemble them, Doron said. The cranes will lift, among other things, 55-ton coolers for the new plants. Patrick Gelsinger, who became Intel’s CEO a year ago, is lobbying Congress to provide grants for building fabs and tax credits for investing in equipment. To manage Intel’s expense risk, it plans to focus on building fabulous “shells” that can be outfitted with equipment to respond to market changes. To deal with the shortage of chips, Gelsinger will have to follow through on plans to produce chips designed by other companies. But a single company cannot do much; products like phones and cars require components from many vendors, as well as older chips. And no country can be alone in semiconductors either. Although boosting domestic manufacturing may reduce supply risks somewhat, the chip industry will continue to rely on a complex global network of companies for raw materials, production equipment, design software , talents and specialized manufacturing.