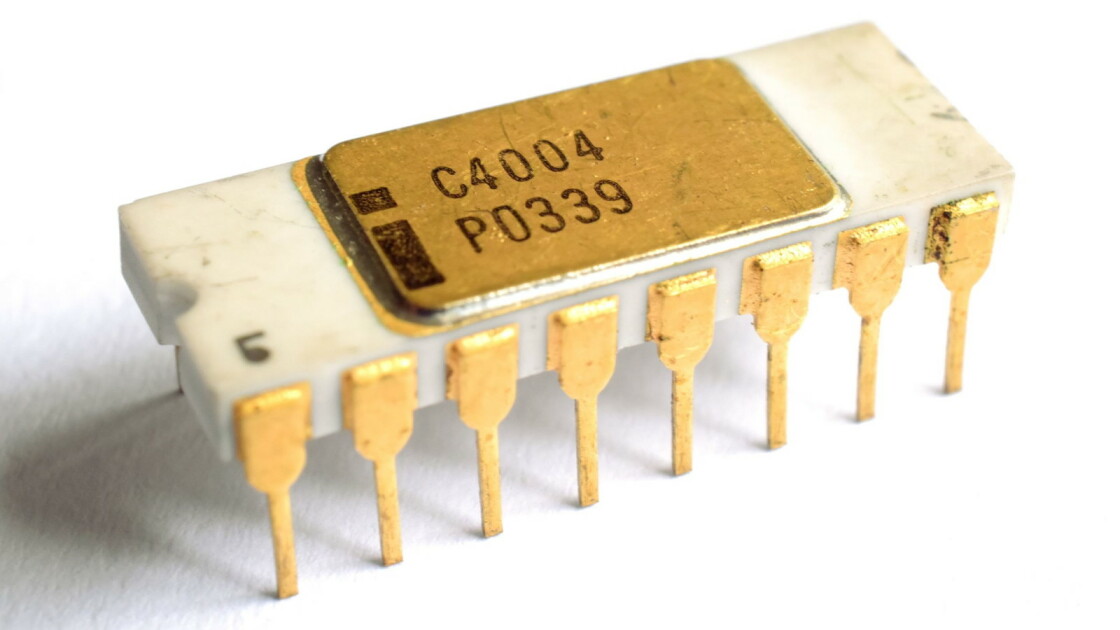 Today marks the fiftieth anniversary of the introduction of the Intel 4004, arguably the world’s first microprocessor, the concept that forms the basis of virtually all electronic products we use today. This chip, originally created to power a calculator from a Japanese company called Busicom, was the first truly versatile computer chip.

A 4-bit binary logic chip, the 4004 was designed as an alternative to a series of more specific chips using a decimal architecture by a team including Masatoshi Shima of Busicom and Ted Hoff, Stanley Mazor and Federico Faggin of Intel. (I told the sometimes controversial story of its evolution in a post about the history of the 4004 a few years ago).

The 4004 was a single silicon chip that measured one-eighth by one-sixth of an inch with 2,250 individual circuit elements. It was part of a chip set that also included a read-only memory chip designed to hold programming (the 4001), a small RAM chip (the 4002), and a 10-bit I / O register to power them. data in the main processor and delete the results (the 4003).

The concept of a “computer on a chip” was not new when the 4004 was created, but the device proved that it was possible to build it with the technology available in 1971 and that there was a market for more. such devices. Indeed, several other projects with similar objectives were taking place at the same time in other companies. But the 4004 hit the market first.

The reason the 4004 is considered so important is that it paved the way for general purpose microprocessors, which would eventually become the workhorse of modern electronics. It was quickly followed by the 8-bit 8008, which then led to the 8080 which was used in the Altair 8080, arguably the first large personal computer; then to 8086/8088, the successor that eventually became the heart of the IBM PC. Of course, 4-bit computing gave way to 16-bit, then to 32-bit, then to the current standard of 64-bit computing.

It’s not just the Intel family of microprocessors that matters. The 4004 was followed by microprocessors of all kinds of other companies, leading to a variety of different architectures and a multitude of applications. (At first TI, Zilog, and Motorola were big competitors; soon AMD became Intel’s biggest competitor; and more recently we’ve seen a plethora of designs using ARM’s architecture, which powers almost every phones and most electrical devices.)

Almost all electronic devices today are powered by a general purpose microprocessor: PCs, cell phones, digital televisions, smart speakers, smart watches, etc. Crisps are now essential ingredients in all kinds of other products, from cars and planes to household appliances. None of this would have happened without the microprocessor.

As we think about the 50th anniversary of this important chip, it’s helpful to remember how much more powerful today’s processors are; and how, despite obstacles, this progress continues. But none of this would have happened without the first microprocessor, the 4004.

Get our best stories!

Sign up for What’s up now to get our best stories delivered to your inbox every morning.

This newsletter may contain advertising, offers or affiliate links. Signing up for a newsletter indicates your consent to our terms of use and privacy policy. You can unsubscribe from newsletters at any time.